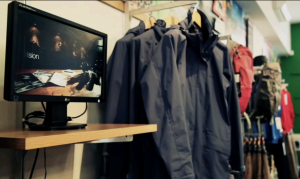 In a recent article titled ‘Retail Marketing- see me, touch me, move me”, Marketing Week gives Rohan’s digital signage project as an example of a simple, efficient exercise of promoting offers and merchandise in-store. Run by digitalsignage.NET, our cloud-based digital signage software, the install was launched last year as an attempt to raise shoppers’ engagement and present the hidden features of the Rohan clothing. The digital advertising screens are run by IAdea’s XMP-330 SMIL devices.

Here’s an excerpt from the piece covering the use of visual technology in retail:

“Outdoor clothing specialist Rohan, for example, has used screens to inform customers about the benefits of its products and the contexts in which they are worn. Working with digitalsignage.NET by Dynamax, the retailer installed monitors in three of its high-traffic stores in order to gauge the reaction from consumers.

“The point with Rohan is that we make performance clothing in a way where the benefits are almost hidden,” explains chairman Colin Fisher.

“In relatively high-traffic stores, it doesn’t matter how well trained the staff are, they can’t see and help everybody. So it struck me when I first saw this [technology] that it was a good way for us to put together presentations of our products.”

Fisher says the screens have had a positive effect in engaging people – especially shoppers who are reluctant to ask for help but appreciate visual aids. Rohan started off displaying simple slide show presentations on the screens before moving on to create its own videos.

“There are people who want to inform themselves and don’t necessarily want to interact with staff until they are ready to buy something,” he adds. “For those people this has been invaluable. Other people will immediately engage and say ‘I’m looking for such and such’ and for them it’s less relevant. Given the nature of what we do, quite a lot of our customers are in the first group – particularly men. said Fisher“

Rohan announces plans to expand the system to other high-traffic stores and to employ larger, more impactful displays to create ambience and a cohesive product proposition across its locations.

You can read more about the project here.

To find out more about the use of digital signage in retail, feel free to download our white paper or contact us.