This is not so much about where best to place a digital signage screen (although it should be considered), but rather what is your content strategy for the screen once you have taken the decision where to locate it.

Time of exposure is often confused (and vice versa) with Dwell time (which we will cover next). But in reality the two are different and both should have different effects on your content strategy.

In essence time of exposure is the amount of time that a typical individual will (regardless of dwell time) look at the screen. Basically the question to answer here is ‘what other events and things are competing for my viewers attention?’ Here are a few examples …

So time of exposure is how long does someone look at the screen before looking away (maybe to look back later), and should  form ideally the basis for the optimum length of any one piece of content on the screen.

As I remember some senior executive at a supermarket once said to me (when talking about time of exposure) “By the time we have shown the lovers walking off into the sunset, the viewer has walked by missing the key end part of that piece of content (the call to action)”. Obviously not a good idea for a content strategy. 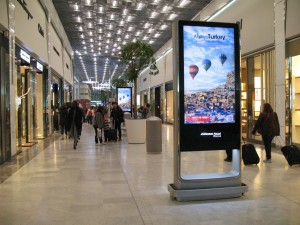 In a similar vein, a few years ago we did some work with Carling, via, who were at the time CBS Outdoor. Carling were placing LCD screens at various locations in the London Underground system. Now anyone who knows the Underground knows that someone walking through there has to keep their wits about them, so even though the dwell time can vary from location to location the content length was determined to be no more than 7 seconds per piece. This was because of the Time of exposure element.

So to summarise ‘Time of exposure’ is how long people typically glance at the digital signage screen before glancing away. It can of course be difficult to ascertain, but if you put yourself as a typical viewer of the potential screen, how long can you look at the screen before looking elsewhere (and you have to be honest when doing this).