When talking about clutter and digital signage, even non advertising related let us first look at the Wikipedia description of clutter –

Advertising or marketing clutter refers to the large volume of advertising messages that the average consumer is exposed to on a daily basis. This phenomenon results from a marketplace that is overcrowded with products leading to huge competition for customers.

Marketing clutter is a major problem for marketers and advertisers, as it is becoming increasingly difficult to be noticed using conventional mass-media… 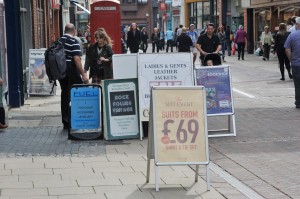 What does this mean as far as placement of digital signage screens goes?

So when placing your screen look at what ‘clutter’ is going to compete for the viewers attention, and if there is competing information then can it be moved easily and without diminishing its noticeability?

This clutter tip is also absolutely key to the screen itself. Just because you can zone the screen into multiple concurrent feeds of information does not mean that you should. So just like the newbie video editor who when creating his first ‘work of art’ uses every fade and transition available to them, and ends up with a visual disaster, so the same is true of screen zoning in digital signage – Less is More !