You're Here: Home / Blog / Marketing and Advertising / Cübb- The game is not over (update) 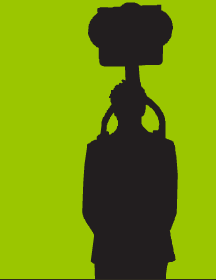 Almost two years ago we started covering the news of Cübb, a company that, in our opinion, had an interesting approach to outdoor advertising. You may remember their digiwalkers (shown on the right) or the Cyklops as they used to call them in France. These were out and about on the streets of Paris (and not only) promoting well-known brands such as Orangina, Stade de France, Virgin Radio France, the French Federation of Tennis, etc.

It’s with great sadness that we announce the end of Cübb’s adventure.  For the past several months, the company had been trying to attract the necessary funding to continue developing new solutions and strengthen its presence abroad but without success. Cübb had partnerships with the British iDOOH Media Group and the Canadian Steel Space (for its recycled containers).

Some of the other products from Cübb’s arsenal were the Cyspace– ‘’an interactive, original and 100% entertaining’’ space made of the above-mentioned recycled containers put at the disposal of brands to offer different types of games and entertainment, as well as the Cytouch and the Cyvan. You can find out more about them on the company’s website.

Pascal Cübb, the company’s CEO and Founder whom we interviewed in 2011 about trends in digital signage and Digital Out of Home said in a recent announcement published on Ooh-tv: ‘’Yep…After almost 10 years of fighting alongside my valued colleagues, I have to throw in the towel in spite of myself… I’ve worked hard and with passion to set up this company…we’ve showcased many things and managed to stand out… I have many beautiful memories from those crazy years.’’

We’d like to take this opportunity to wish him and his team the best of luck in their future projects.

Our articles featuring Cübb can be found here.

Update- 7 June 2013– Pascal Cübb has announced last week the company’s acquisition by PHB Events, an organisation that manages events for some of the largest companies in France (such as SNCF,  IBM, Nokia, EDF etc.) and who will definitely benefit from Cübb’s digital offer. Cübb will keep its name and brand image as well as the customers and the advertising products acquired and developed so far.  We can only wish them the best of luck in what it is- as Pascal said- a new adventure! More information about the acquisition can be found here.