The end customer, of course.

Industry leading publication-DailyDOOH signaled today the attrition war going on between Korean and Japanese display manufacturers, who are reporting huge losses for the last Q of 2011 (and not only). According to the publication, these companies are expected to launch a price war in 2012, which might be a worrying news for resellers and VAR’s.

Our brief ideas on the subject  are the following:

1) resellers could maintaining prices at current level (or by diminishing them slightly) in an effort to protect their margins. The problem with this strategy is that not all resellers will refrain from dropping prices  and those who don’t do the same, will end up being uncompetitive so they too will eventually cut prices;

2) small and medium businesses will be further encouraged to embrace digital signage or in their words, ‘to hang a screens on a wall” as the system becomes increasingly affordable for them. That’s not to say that SaaS digital signage is an expensive offer, as it was particularly designed to suit their needs (and financial potential) but the overall costs will be further decreased. Will this trend make digital signage so mainstream in the SMB’s area  that the decrease in display margins will become unnoticeable for  VAR’s/ resellers? Maybe, hopefully yes, but we can’t be sure.

3) at the higher end of the market, this price drop will probably entice brands to experiment with the technology (mainly those brands who haven’t done so yet).

Regarding the main question- is the price decrease a bad or a good thing? Its answer depends on the angle you’re addressing the problem from. We’re very curious about the final results of DailyDOOH’s poll and see what other industry fellows think. If we were to follow the advice of the wise Sun Tzu’s advice (famous Chinese war strategist) then attrition wars are to be avoided because of their effects.

P.S. The partial results of the above mentioned poll show that 73% of respondents share our opinion that the attrition war is detrimental to our industry while for 13%  of them this is of no concern. There’s not too much to comment on these findings as they are sort of in line with what we’ve said before. The main concern relates to endangered profits for both Asian manufacturers and their resellers. 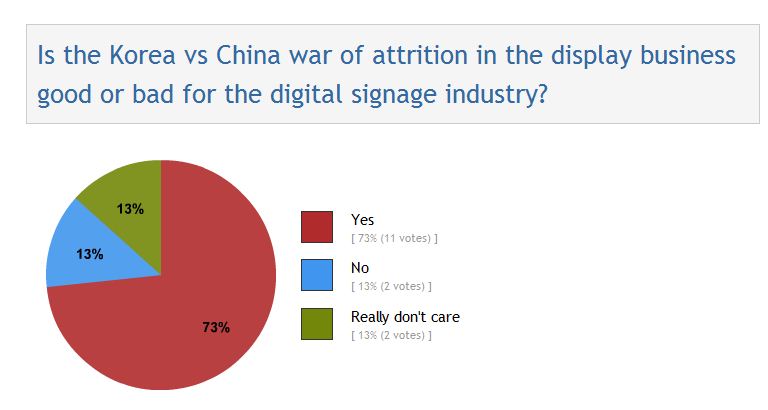