Well, Digital- Out-Of- Home specialist Cübb had an original take on the concept, physically taking the screens to the target audience of various brands wherever that may be. This time, the digiwalkers* or the Cyklops  were sent on a special mission in one of the most important metro stations in Paris- Chatelet Les Halles. Their aim- informing commuters about the newest volume of Kid Paddle- a famous French comic book and sending them to the nearest book shop (i.e. FNAC from Forum des Halles) where a book signing session was taking place.

Cübb was entrusted with the deployment of this location- based marketing effort by Metrobus, a French media agency selling advertising space in train and metro stations.

We are told that Samsung Mobile France is set to use the ”digiwalkers” for its new campaign and Youtube series ”The Geeks”- in an effort to make the message impossible to miss for the targeted population (20-30 year-olds as shown by the video). It’ll be interesting to see where this marketing campaign will be rolled out and to which parts of Paris the screens will be taken. 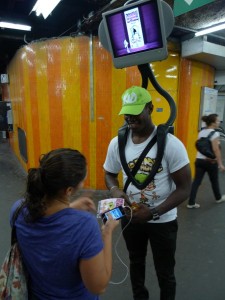 Mobile, interactive & digital- the principles behind this media concept 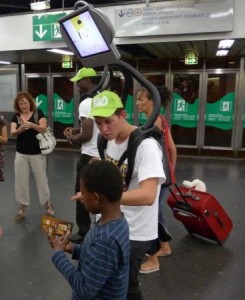 – children were informed about the new volume of the comic book

More articles about the ”digiwalkers” are available here.

*The ‘digiwalker’ concept is brought to the UK by iDOOH Media Group.