Social media growth stagnates as the point of saturation approaches, says the North American Technographics Online Benchmark Survey. Privacy concerns and increase of social networks like Facebook diminish the participation on other platforms. The study reveals that in 2010 people blogged less, commented less and generally joined online discussions less that they used to. Not a surprising finding considering the steep increase of social media participation. Even though the percentage of joiners is 59% (far from 100%) the number of critics and collectors has decreased.

Europe seems to be generally ahead of the US in terms of social media consumption so we could assume the situation is brighter on this side of the Atlantic but we didn’t find any reports on that as yet (but stay tuned as fresh news are on their way brought to you by our colleague Howard who is now attending the Social Media World Forum). London was called the capital of Twitter and Twittering was 2010’s social activity let’s say it’s not that bad. But anyway the decreasing trend will appear here as well sooner or later.
So your social media audience is not increasing or even decreasing. What can you do?

– surprising but true- engage with older adults (over 35). The study shows that even though they are not highly SM innovative they continue to join Facebook and LinkedIn.

– arguably the most serious task of all is improve your content in other words give people a thorough reason to join your network;

– improve the display of your SM content. Digital signage comes in handy by allowing you to post tweets, RSS feeds etc. on screens which will definitely make people more aware of your online presence. Facilitate their consumption of social content and you will be rewarded. 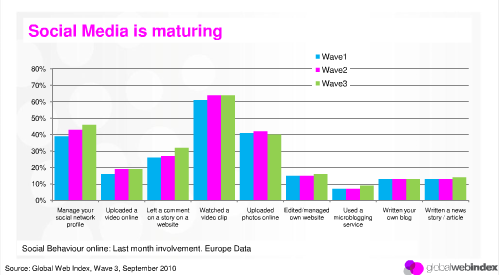 average time of social media use