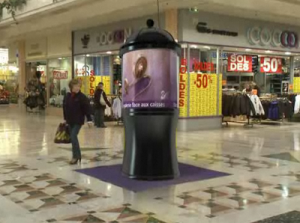 This year’s POPAI (Point of Purchase Advertising International) edition in France brought some innovative digital signage displays to our attention such as the 360°digital columns. According to Futuramedia, the advertising management company, the rotating LED screens are meant to ”entertain the point of sales, to create an event in the mall and allow the brand address the shopper differently”.

In highly crowded points of sale such as shopping malls the screens could so easily ”fit in” the environment that they go unnoticed. The idea behind this innovation was to overcome this problem better than other types of digital signage displays . Futuramedia claims they do (which is partially happening because they’re a novelty) quoting their survey’s results according to which 88% of the interviewed population spotted the new rotating screens and confirm its strong impact.

To watch a demonstration of the new 360°digital columns click here. It doesn’t seem like the video was shot in the rush hours of the day nonetheless the screens grab attention.