You're Here: Home / Blog / Marketing and Advertising / Scary stuff. Ads that smile back at you. 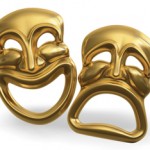 It’s not 2054 yet but Minority Report’s surreal ads could become more real than you think. Ads will not be shouting at you just yet (as they did to Tom Cruise’s character ”John Anderton- You could use a Guinness right now!”) because that would be something of a nightmare but they might just be able to adjust to your mood. Sad?- you could use a shiny holiday commercial then. Happy?- the ads might smile back at you. By using emotion recognition software your face expression, head pose and eyes would be scanned and ”read” for identifying your state of mind (you can already play with a similar software here that’s able to recognize if you’re glad or sad) so you’ll be ”served” with the right ads.

The ”gladvertising” and its corresponding software might go one step further and identify your age, gender and interests; as a Japanese company has already undertook research in this direction. It’s a bit scary to think you’d be a such a ”precise” target and you start wondering if consumers really want to be ”tracked” (or hunted) anytime and everywhere they go. Some will be willing to provide personal information for targeted advertising, for something in return. Wifi hotspots use this principle and brands might use them for luring people into this. Digital signage could be used as a support medium for these hotspots and a platform for the future ”gladverts”.

Some people think it’s ”creepy” especially since public data could be collected without you being quite aware of that on the grounds that it’s ”public”. Nonetheless, public data doesn’t automatically imply that people actually want this data to be used for advertising. At the moment there is no legislation regime in place to deal with the blurring of online and offline privacy which puts consumers in a vulnerable situation.
Will ”gladvertising” really make us glad? Is it too intrusive? As people don’t even want other people to know how they feel would they want a software to ”read their mood” for having them buy things? An interesting debate is rising.

P.S. I’ve just come across a Panasonic software – Business Intelligence Upgrade Kit that can register 64 faces and estimate people’s age and gender. The programme is claimed to be quite inexpensive and Panasonic has clients already using it. But do their clients’ clients know about it…?

See the next generation vending machine– that recognizes your age and gender and serves you appropriate ads, all in a rather discrete manner. The machine is developed by Sanden, a large manufacturer of vending machine in collaboration with Osaya Electronics and Intel (using its software package- Audience Impression Metric).

3 thoughts on “Scary stuff. Ads that smile back at you.”