LG showcased three of its “dreams” recently at the IFA exhibition in Germany, including a doubled-sided screen, a wall paper screen and a waved 4K screen.

The double-sided screen delivers two crystal clear screens which are slimmer than most normal flat screens on the market . The 55-inch double-sided display is only 5.3 mm think and weights only 12 kilograms making this ideal for advertising totems. 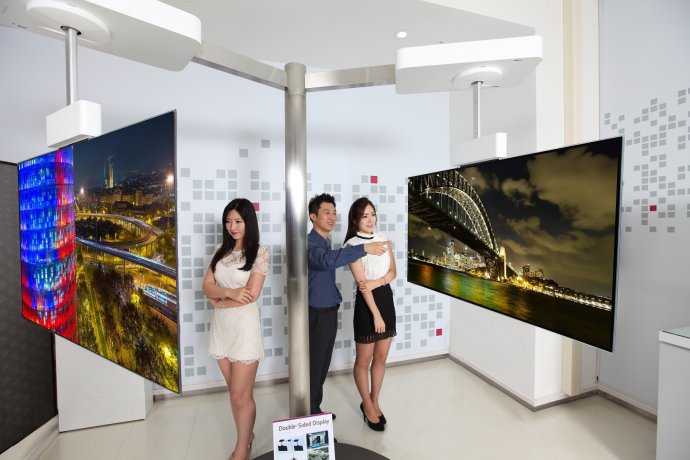 The “wall paper” screen lives up to its name. Using a magnetic backing, the display simply peels off the wall and can be moved almost anywhere. It can bend in various positions as the screen continues to play your content, etc. The wallpaper OLED display has a thickness of less than 1mm. 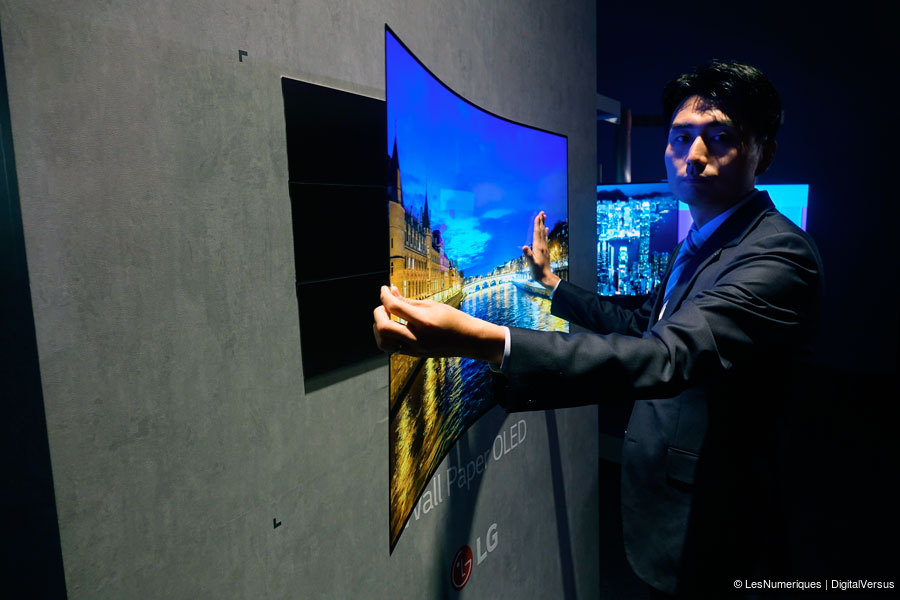 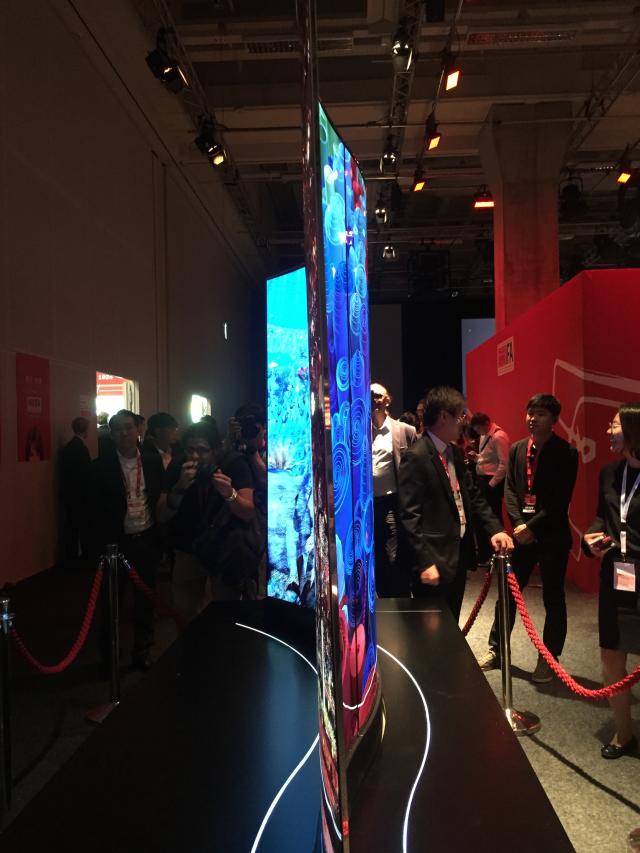 The Press release from LG said …

Dr. Sang Beom Han, CEO and President of LG Display, the world’s leading innovator of display technologies, said today that OLED represents a revolutionary leap in display technology that will change people’s lives as he delivered the opening keynote speech at IFA 2015 in Berlin.

Displays are becoming increasingly important as their application expands beyond consumer electronics and IT/mobile devices to cars, hospitals and schools.

“We want OLED to be the revolution of light that opens up the future we all want to live in,” said Dr. Han, who is the first display industry CEO to have been given the honor of delivering the opening IFA keynote address, which is normally reserved for heads of consumer electronics companies.

Dr. Han told the audience that OLED is the only technology that overcomes the limitations of conventional displays because it offers enhanced reality combined with dynamic form. OLED offers superior light and color expression because it is based on self-emitting light sources. Its flexibility and its transparent nature are the result of the development of innovative OLED materials. These essential attributes mean OLED can bring to reality what has only been imagined until now.

Dr. Han said that LG Display’s research development is focused on delivering value to customers that cannot be achieved with conventional displays. OLED displays can be used in a number of future applications from wearables and fashion to home furnishings and room designs.

Referred as “The Father of OLED,” Dr. Ching W. Tang, a professor at the University of Rochester in New York and the Hong Kong University of Science and Technology; Prof. Dr. Peter Zec, founder and president of the Red Dot Design Award; and Udo Heider, Vice President of Merck, the global chemical and materials company, made appearances during the keynote presentation and stressed the possibilities that OLED offers of turning imagination into reality.

Dr. Ching W. Tang commented “Without backlight and other auxiliary layers, the OLED display is fundamentally less complicated compared to LCD, and in time less costly to manufacture. I have no doubt, given its advanced features and superior performance – foldable, wearable, flexible and transparent, OLED is the display technology for the next generation.”

In addition, Sir Ridley Scott, the acclaimed film director, said in a film segment of the keynote presentation that OLED TV is the first display technology that shows perfect black, which creates a sharp color contrast that fully delivers the picture quality that he envisions in making his movies. “I think this is a game-changer, and I’m happy to say that I would love to have all my films viewed on the revolutionary OLED TV,” he added.

Although LG Display has chosen a difficult path in pioneering OLED technology, Dr. Han said the company is proud in achieving the goal of making a display that realizes people’s imagination and dreams. He predicted that OLED has a bright future because of the convergence of different technology sectors, with the participation of outside partners benefiting from OLED’s growth.

LG Display also showed a 55-inch double-sided commercial display with a thickness of approximately 5.3mm, which is thinner than the latest smartphone, and weighing only 12 kilograms, making it suitable to be shown in a variety of locations. In addition, the company presented a 55-inch “wallpaper” OLED display with a thickness of less than 1 millimeter that can instantly be attached to and removed from walls because of its magnetic backing.