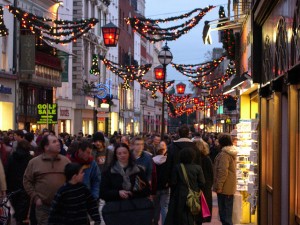 You know we like statistics so here are our latest findinds in terms of data on Black Friday, Cyber Monday and the holiday shopping season in general. We hope you’ll find those useful and…your welcome!

2) 51% of shoppers will research online and then buy in store. Only 17% of them will visit a store first and then buy online (Google, Holiday Consumer Intentions 2012)

3) 28% of the retailers have seen an increase in the percentage of online sales coming from tablets (Shop.org/Forrester Research Inc cited by the National Retail Technology, 2012)

4) Almost half of them will promote Black Friday deals on their website’s home page (Shop.org)

5) The ‘’in-store mode’’ feature of Walmart’s mobile app used by approximately 60% of those using the app, in less than 2 weeks after its launch (cnet.com, November 2012).

6) 12% of men say they always check prices on their mobile phones when in store while only 5% of women acknowledge doing so (Kellogg Shopper Index 2011).

7) According to a 2011 study, 34% of the interviewed shoppers said they planned to shop on Black Friday (International Council of Shopping Centers via HubSpot)

8) The National Retail Federation expects a 4.1 %increase in retail sales during the months of November and December, a higher one than the average holiday sales increase for the past 10 years (3.5 %). The total amount of sales projected for this holiday season is $586.1 billion.

11) Clothing ranks first on the list of gifts people plan to offer and 3rd when it comes to the gifts they want to receive (Deloitte 2012).

12) Consumers still like shopping at stores, an attitude mostly shared by those planning to buy premium or luxury items (Kellogg Shopper Index 2011).

13) 51% of those surveyed by Deloitte said they’ll be shopping at Discount/ Value department stores. (Deloitte, 2012)

14) Between Black Friday and Cyber Monday, display ads have a 32.6% higher engagement rate than the average. (Rhythm New Media, 2012).

16) 48% of Deloitte’s 2012 survey respondents admitted that social media will be part of their holiday shopping process.

17) 66% of social media users that made a purchase on Black Friday/ Cyber Monday 2011 did so as a result of interacting with friends and family on social media (Rhythm New Media, US).

19) Retailers report robust post- Thanksgiving sales with consumers having spent 13% more than in 2011, the equivalent of $59.1 billion, according to the latest data disclosed on Friday (International Council of Shopping Centers).

So what’s the conclusion? The experts give us some helpful tips…

‘’It’s not about offline versus online. It’s about taking advantage of all the channels, whether it’s stores, Internet, mobile or social media.’’ (Eric Anderson, Professor of Marketing at Kellogg School of Management).

“The danger for stores is, of course, that they end up as showrooms for Web competitors like Amazon, but it doesn’t have to turn out that way.” he says. “As in any arms race, victory goes to those who best adapt to the new game.” (Richard Wilson, Kellogg Shopper Index 2011).

Download our white paper to learn how in-store digital media can help you promote your deals, enhance your products’ presentation, influence customers and increase sales.