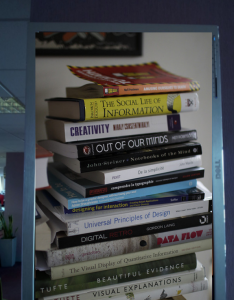 It’s probably obvious that we thoroughly enjoy reading industry publications and ‘following’ the newest tweets and blogs from the AV/ digital signage and advertising spheres.

And when we discover some gems (which happens quite frequently), we make a note and feature them in an article like this. So here are the latest articles we’ve enjoyed and wanted to share with you, as a sign of appreciation from us.

1)      Digital signage makes a good neighbor for restaurant, phone store– this is one of the best case- studies of last week, published by DigitalSignageToday that presents an interesting  collaboration between a restaurant (namely Kitchen 67 Brann’s Café in Michigan) and a Verizon phone store that decided to share technology for the benefit of their customers (and businesses).

As the store is accessible from inside the restaurant, a digital signage screen tempts people queuing for Verizon’s services with the delicious food of Kitchen 67, while also notifying them when it’s their turn.  The article mentions other interesting technologies shared by the two ‘neighbors’.

2)      The University of Oregon Interpretive Center immerses visitors into its past and future with digital signage– Digital Signage Connection retells the story of an university that succeeded to create an attractive information point for a varied audience through the use of digital signage. The interactive display acts both as a platform for honoring alumni and as a point for recruiting new students the article notes, describing the methods adopted and the results achieved.

4)      Politics is good for DOOH business says Gail Chiasson of DailyDOOH pointing out the popularity of Digital Out Of Home among different advocacy groups and ‘Washington insiders’ that want to get their message in front of large and influential audiences during the prelude of the U.S. presidential elections.  She mentions the cost- efficiency of the medium (as compared to TV) and its flexibility (frequent updates based on recent events) as the main reasons for its popularity.

5)      Times Square interactive promo bridges digital and social, an initiative applauded by Sixteen:Nine’s Dave Haynes. People are given the chance to submit a photo via Titanic’s Facebook page to be shown on a screen in Times Square thanks to Locamoda’s application. The project got thousands of shares and hundreds of thousands of likes on Facebook in less than a week and Stephen Randall, LocaModa’s CEO gives us a sound advice based on this experience: avoid silo thinking.

6)      Toledo man’s billboard plea: ‘’Please hire my wife’’ – We’ve seen original uses of digital media signage -from marriage proposals to wishing someone happy birthday in a unique manner, but we’ve never encountered the case of a job query on behalf of somebody else so far. New York Daily News featured the good-willing husband from Toledo, Ohio whose wife was a little bit taken aback to see herself in an ad on a giant billboard.

To discover more articles that we’ve featured in the past (i.e. some lost gems) please read: