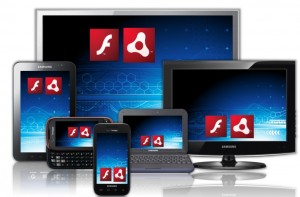 Adobe who are holding their annual MAX conference (we attended last year) have announced the availability of AIR 2.5. What does this mean for the digital signage industry? Well it means that AIR will now be available on Samsung Smart TV’s from 2011 (and probably Google TV) meaning that digital signage players could soon shake the need to have any PC or device connected to the screen; as the screen itself becomes ‘smart’
Probably of little use to enterprise developers of digital signage but great for those that target the SMB sector.

LOS ANGELES, Calif. – October 25, 2010 – At Adobe MAX, Adobe’s worldwide developer conference, Adobe Systems Incorporated (Nasdaq: ADBE) today announced Adobe® AIR® 2.5 software for televisions, tablets, smartphones and desktop operating systems. A key element of the Adobe Flash® Platform, AIR enables developers to leverage existing code to create and deliver standalone applications across devices and platforms. Adobe AIR now supports smartphones and tablets based on Android™, iOS, BlackBerry® Tablet OS, and desktops including Windows®, Macintosh and Linux® operating systems. In addition, Samsung will be the first television manufacturer to ship Adobe AIR in its line of Samsung SmartTV devices while Acer, HTC, Motorola, RIM, Samsung and others are expected to ship the runtime pre-installed on a variety of devices including tablets and smartphones later this year and early 2011.

With Adobe AIR, developers are able to use familiar tools including Adobe Flash® Professional CS5, Adobe Flash Builder™ and Flex to build rich standalone applications. Hundreds of them are already available on Android Market and Apple’s App Store today. In addition to AIR 2.5, Adobe unveiled Adobe InMarket™ today, a new service that allows developers to easily distribute and sell their applications on app stores across different device types from Acer, Intel, and others. Adobe InMarket operates seamlessly in the background and allows end users to download applications directly from the storefront. For more information about Adobe InMarket visit www.adobe.com/go/inmarket.

“With the release of AIR 2.5 more than three million Flash developers can now build a single game or application and easily deploy it across multiple application stores and devices,” said David Wadhwani, senior vice president, Creative and Interactive Solutions Business at Adobe. “This is a huge step forward for developers looking to build rich, engaging applications but have historically had to incur the cost of building and deploying this content across multiple devices and platforms.” AIR 2.5 enables rich application experiences through a series of new features, including support for accelerometer, camera, video, microphone, multi-touch and gestures. Support for Geo Location allows developers to create location-based applications and services. AIR 2.5 is also able to display native browser controls within the application allowing for the integration of HTML and .SWF content. With SQLite support developers can easily store and cache databases inside an AIR application. In addition, hardware acceleration for Adobe AIR is enabled across all major silicon partners including Broadcom, Intel, nVidia, ST Micro, Trident, Texas Instruments, Qualcomm and others.

“The HTC Experience is centered on delighting our customers and the addition of Flash Player 10.1 to many of our phones such as the Droid Incredible by HTC, HTC Evo4G and HTC Desire demonstrates this,” said John Wang, chief marketing officer, HTC Corporation. “We are excited to be bringing a great phone experience and the collaborative results of the millions of AIR developers around the world into the hands of HTC’s customers.”

“As a longtime partner of Adobe, we are excited that users will have the opportunity to enjoy AIR applications and content on our devices,” said Christy Wyatt, corporate vice president, software and services product management at Motorola. “Since July, we’ve announced eight Android-based smartphones with Flash Player 10.1 support, including the first phone with Flash out of the box. AIR 2.5 is the perfect complement to Flash Player giving customers the freedom to choose between rich content experiences inside and outside the browser.”

“The BlackBerry Tablet OS offers developers a highly optimized and flexible platform that integrates Adobe AIR with high performance audio, video and graphics optimizations, as well as support for a WebView class and native C++ extensions,” says Tyler Lessard, VP Global Alliances & Developer Relations, Research In Motion. “By building tight integration with Adobe tools into our BlackBerry Tablet OS SDK for Adobe AIR, developers are now able to optimize their applications for the tablet form-factor and deliver an enhanced end-user experience. We are excited by the breadth of content that the development community will be able to deliver for the BlackBerry PlayBook tablet using our new development tools and AIR.”

Already one of the top free apps on Android Market, with more than 50,000 users giving it a 4.5-out-of-5 star rating, Flash Player 10.1 brings rich Flash based content to mobile devices inside the browser. The runtime is now certified on close to a dozen Android devices and will become available on dozens more over the coming weeks and months. Adobe also announced that Flash Player 10.1 was downloaded more than two million times from Android Market. In addition to Android Market, the runtime is distributed directly by device manufacturers and operators via pre-installs and operating system upgrades. With Flash Player 10.1 available on Android and Google TV today, BlackBerry platform, webOS, future versions of Windows® Phone, LiMo, MeeGo,and Symbian OS are also expected to support Flash Player 10.1. For a list of devices supported today, visit http://www.adobe.com/flashplatform/supported_devices/smartphones.html.

Adobe also announced previews of developer tools that make the process of multiscreen development more streamlined. With new releases of Flash Platform tools including an AIR 2.5 software development kit (SDK), developers can build mobile and multiscreen applications for smartphones and tablets, while maximizing design and development productivity. An update to the open source Flex framework provides developers with a common framework for building web, desktop and now mobile applications. Developers can build standalone mobile Flex applications with the same ease and quality as on web and desktop platforms. For details visit http://labs.adobe.com/technologies/flexsdk_hero/.

Adobe AIR 2.5 and the Adobe AIR 2.5 SDK for Android and desktop operating systems including Windows, Macintosh and Linux are available today.

Users of Android 2.2 “Froyo” devices can download Adobe AIR directly from Android Market today. Adobe AIR 2.5 for BlackBerry Tablet OS and the Samsung Smart TV platform is expected to be available early 2011. A preview release of Flash Builder is available for download.

Adobe revolutionizes how the world engages with ideas and information – anytime, anywhere and through any medium. For more information, visit www.adobe.com.