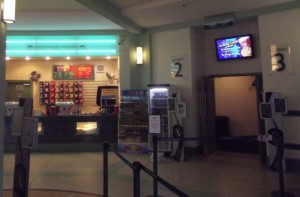 One of the three displays in the lobby controlled by digitalsignage.NET

By replacing paper posters with digital ones, they are now able to communicate a variety of information such as meal deals, upcoming movies and ticket prices, in an eye-catching format (images and HD videos) and reduce the consumption of paper and its associated costs.

The displays are managed by Review Systems (a partner we acquired at the beginning of 2012) that also creates the content for the venue and schedules it in digitalsignage.NET.

Jonathan Brown, Managing Director at Review Systems commented on our software saying: “After using digitalsignage.NET for the last 12 months we have found it to be the right content management solution for us, easy to install and use. The ability to schedule and play High Definition content was a must for our applications and it delivers on all levels.”

The venue information is mixed with adverts of local businesses, generating extra- revenues for the cinema. 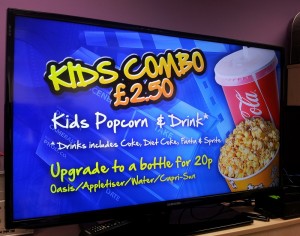 Content created by Review Systems and managed in digitalsignage.NET

‘’I think cinemas have an advantage over other types of businesses.’’ said Brown. ‘’They usually have a large number of people inside their premises on a regular basis, people that many other local businesses want to reach (think solicitors, colleges, hairdressers etc). So selling advertising space on the screens isn’t only natural but also much easier for them.’’ And in this case, it’s all for a good cause.

Our digitalsignage.NET is also powering the digital advertising screens of Perth Playhouse Cinema (see the photo below), those too managed and installed by Review Systems. 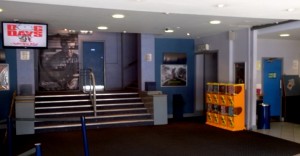